DENKMAL IS A PUBLIC ART GIFT TO THE COMMUNITY OF GEMEENTE OUDE IJSSELSTREEK IN THE NETHERLANDS. THE GIFT WAS OFFERED BY GEMEENTE NIEUWE IJSSEL ON MAY 4, 2020 AND PRODUCED IN 2022. 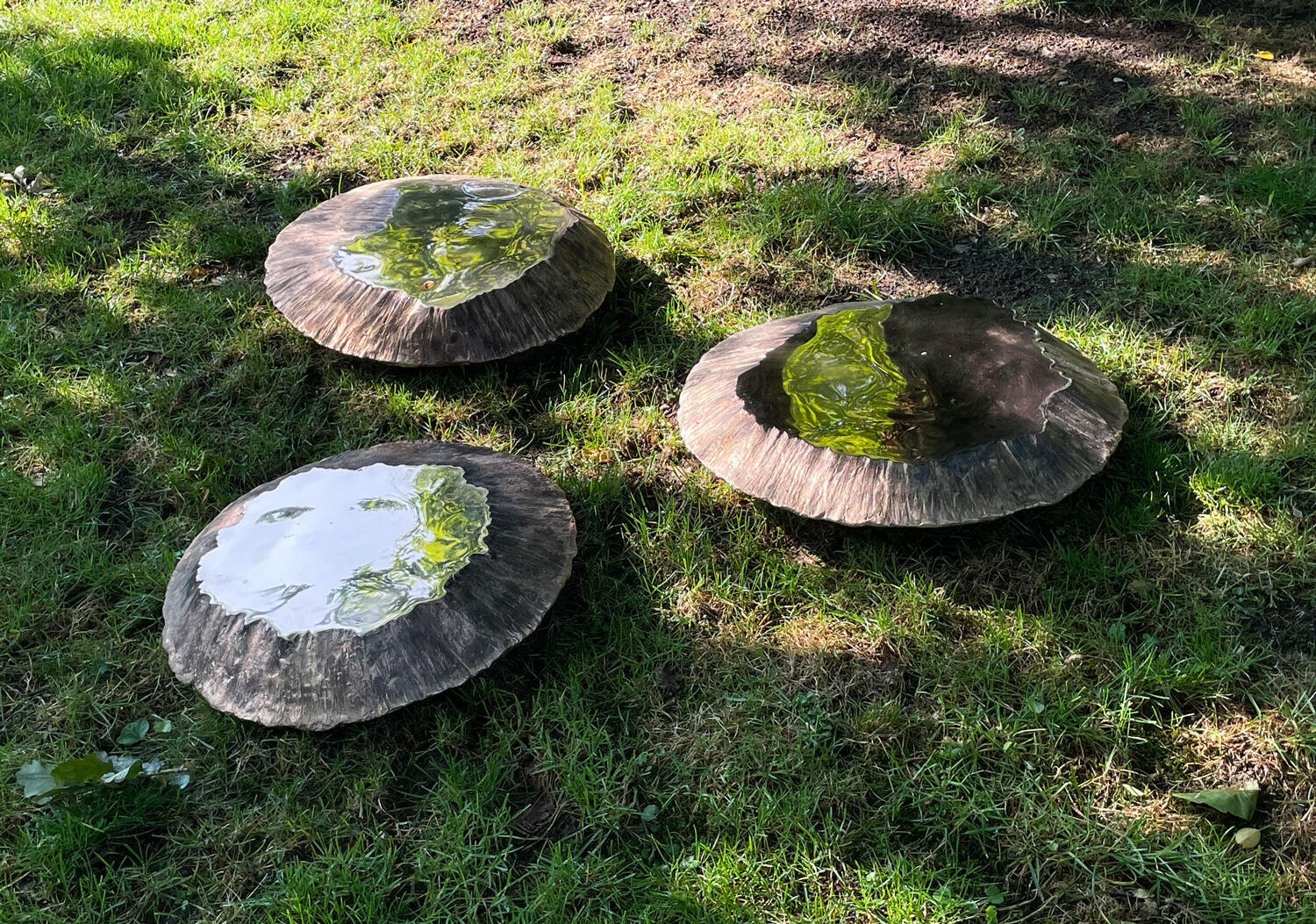 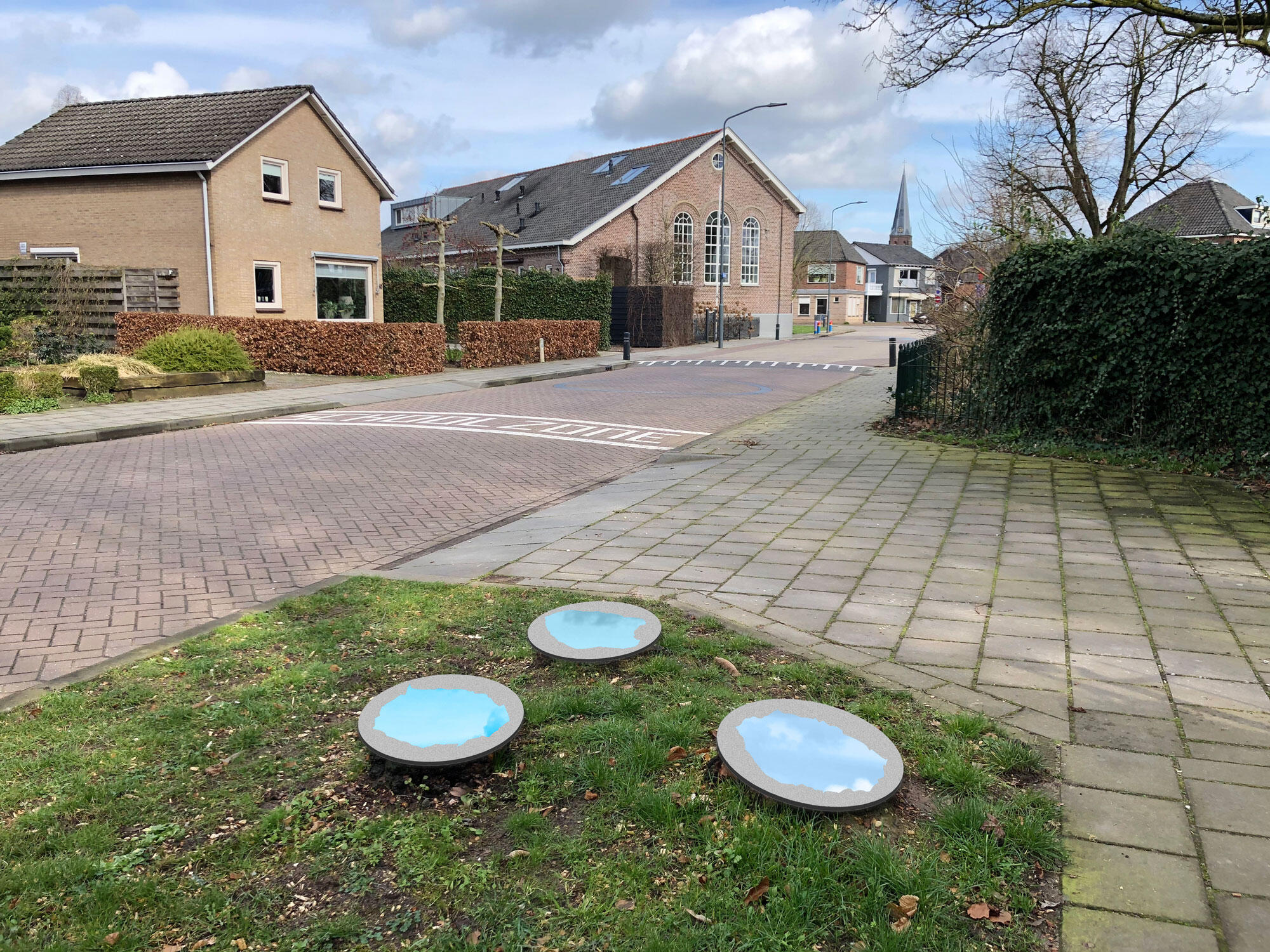 Artist impression of DENKMAL 2020 and drawings from 2021

DENKMAL is a public artwork in Gendringen in the Netherlands on the border with Germany. In German DENKMAL means 'Memorial'; in Dutch it means 'Mould for thought' and 'Think strange in a funny way'. DENKMAL is a one-worded poem.DENKMAL is the memorial for a tree group of three birches in front of the formerly City Hall of Gemeente Gendringen. The three trees were planted to emphasise the symbolic meaning of the three rings in the coat-of-arms of this municipality. Three years ago the trees died over a short period of time by drought caused by climate change. The first tree died, but since their roots were entangled the other two died as well. 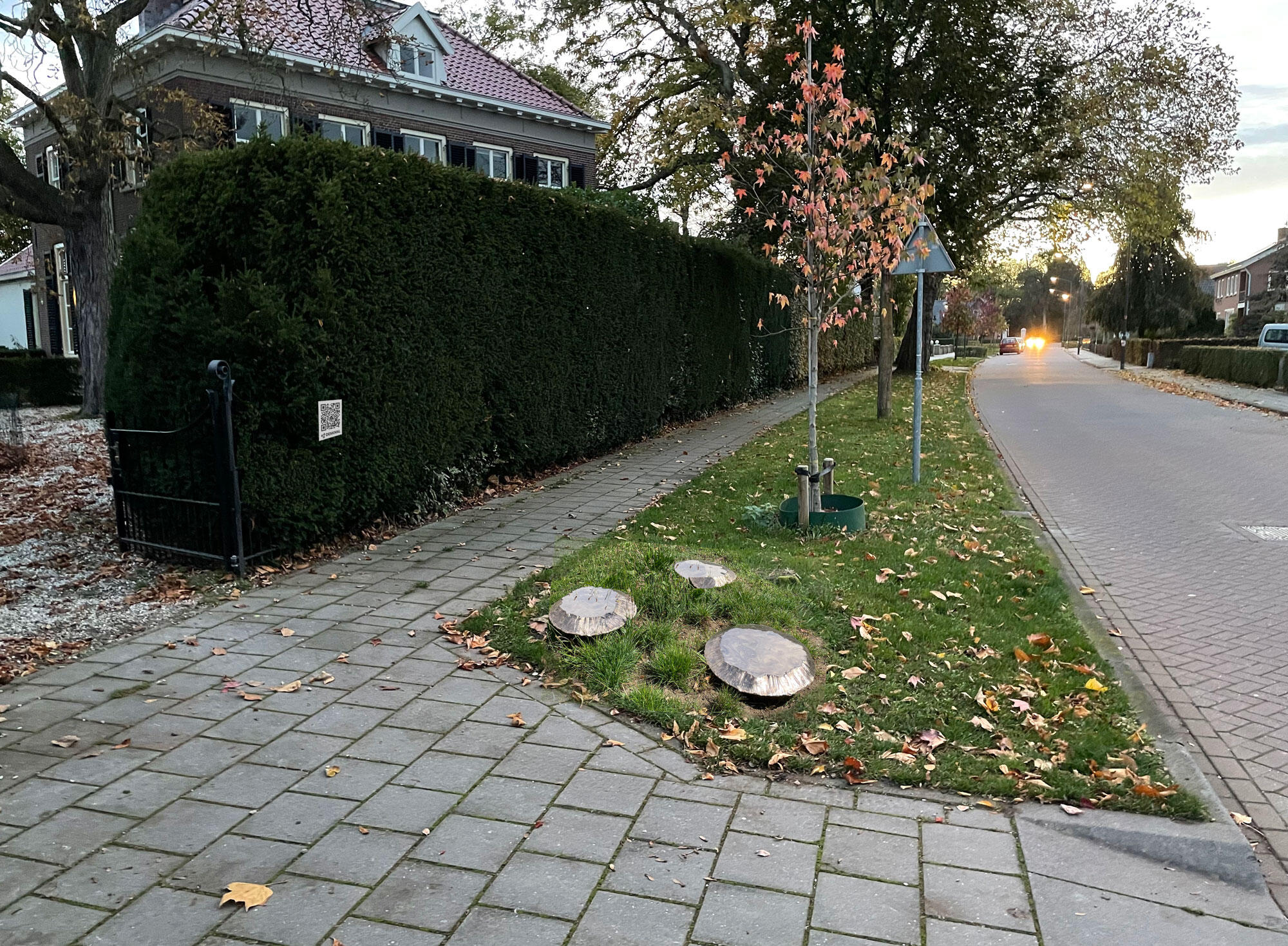 Presentation of the coat-of-arms in 1959.

The three trees were planted around 1960 in front of the City Hall. The tree group mimics the three rings in the coat-of-arms of Gemeente Gendringen that hangs prominently on the front of the building. It shows the coherence between the three ecologies: the human mind, the social community and the living environment. 'Mens, maatschappij en milieu' as they say in Dutch are intrinsically connected. Gemeente Gendringen was really ahead of its times. 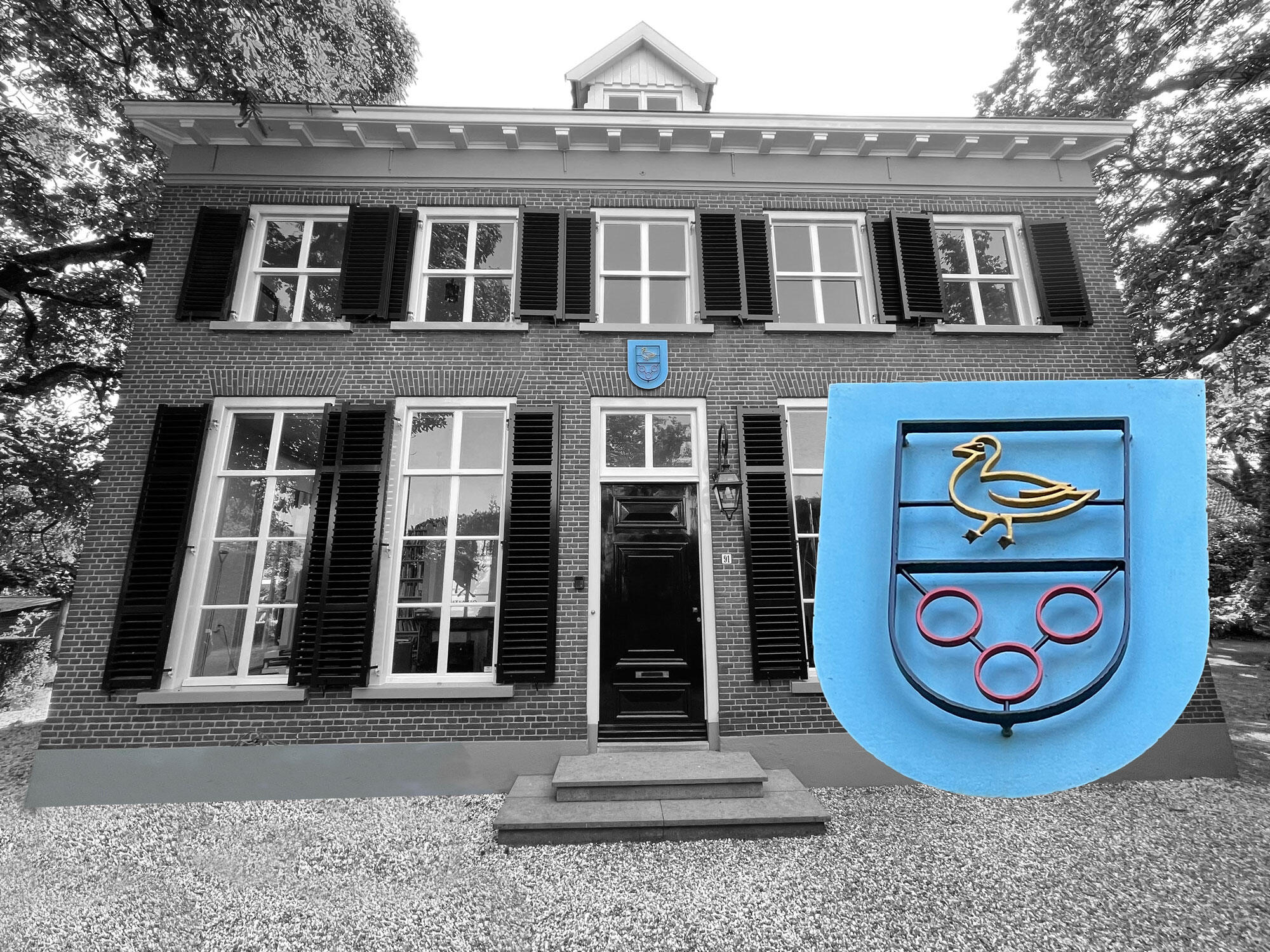 After Gemeente Gendringen merged in 2005 with Gemeente Wisch into Gemeente Oude IJsselstreek a new identity was assembled of parts of the two municipalities. It was decided the three rings of Gendringen should appear in the new coat-of-arms but the goose was replaced by a lion. The blue waves represent the river Oude IJssel. The rings survived but today no one in Gemeente Oude IJsselstreek knows what the rings represent. Its original meaning has faded over time. 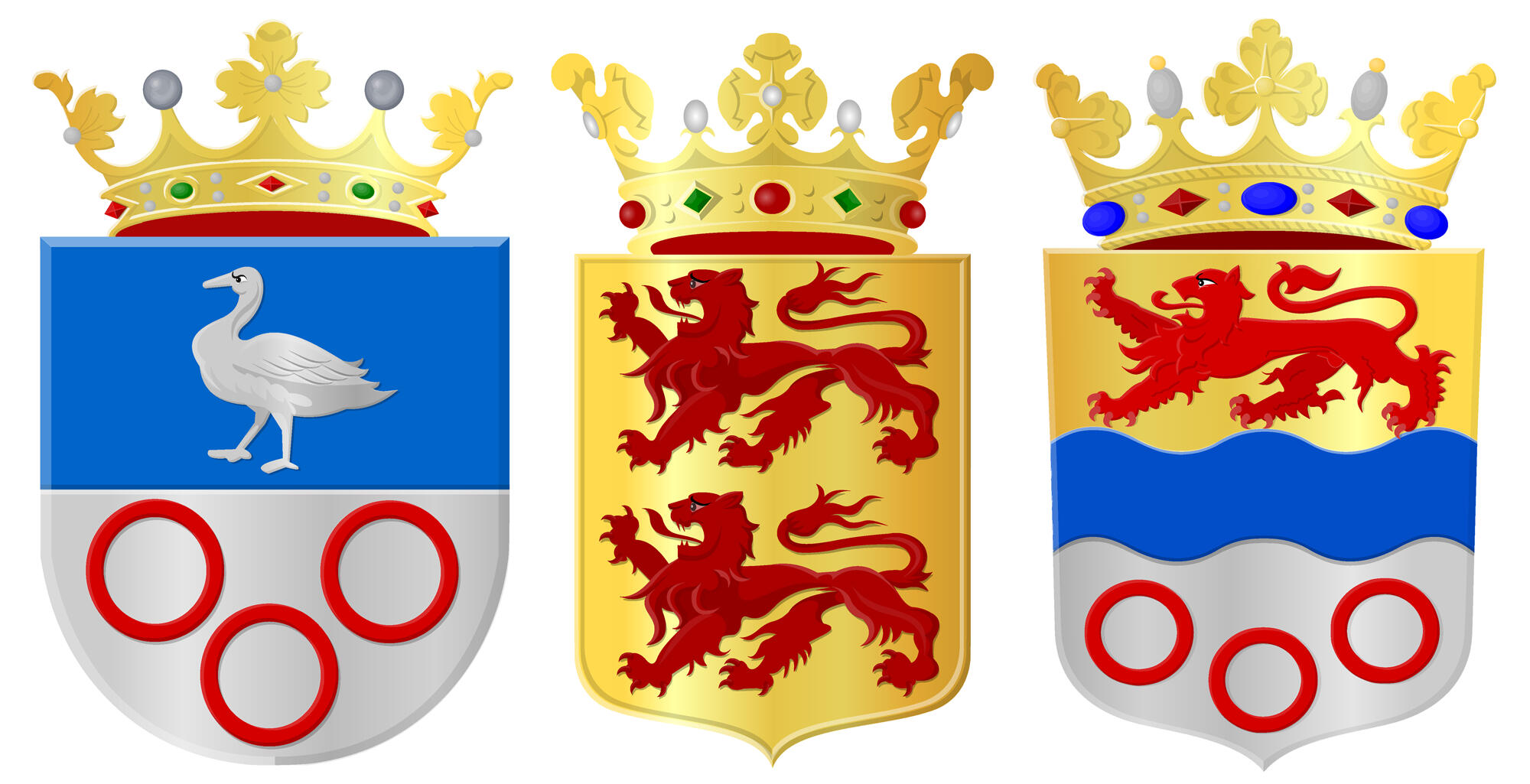 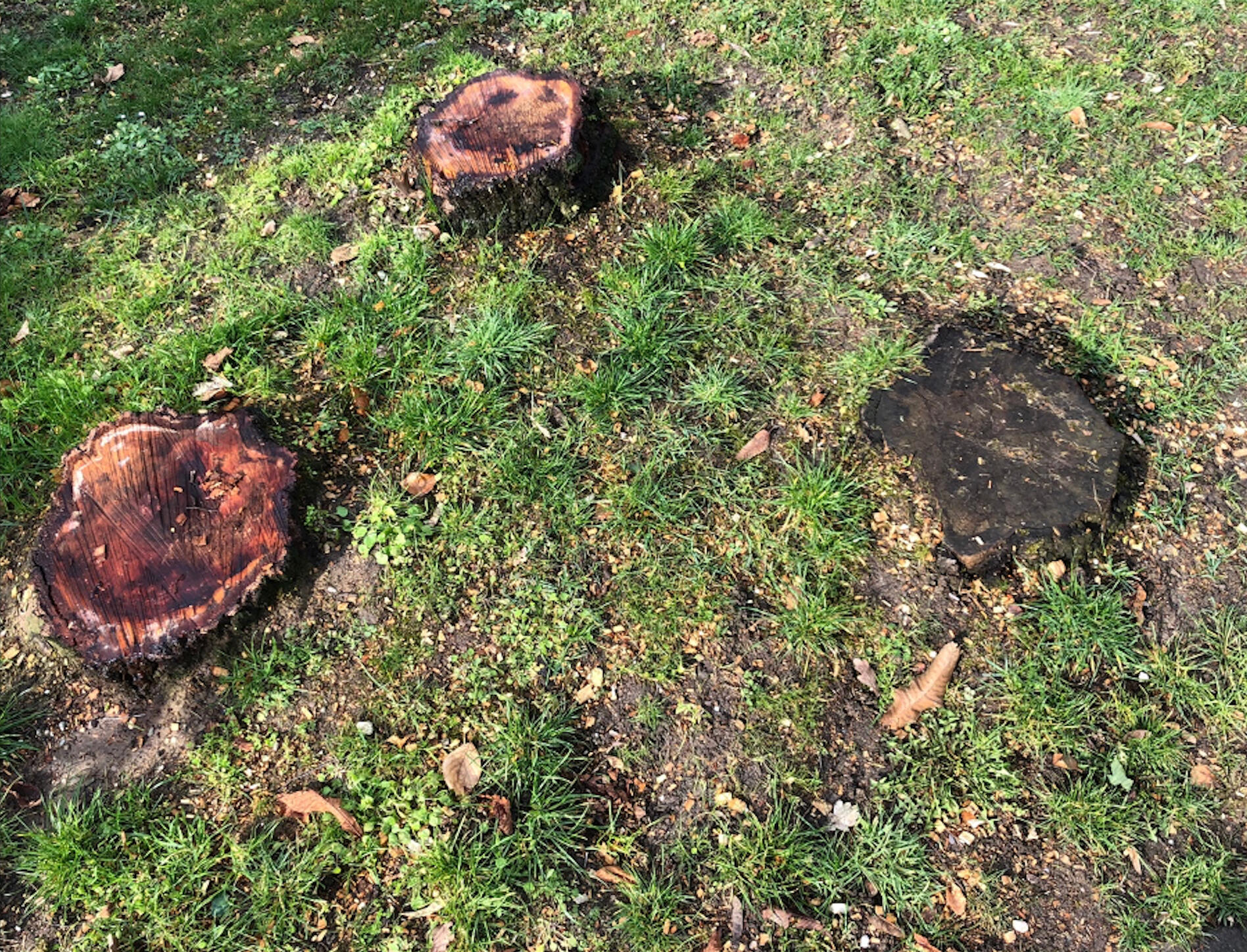 DENKMAL articulates the coherence between the three ecologies as the main source of identity of the new community of Gemeente Oude IJsselstreek: Mens, Maatschappij and Milieu, in English the mind, the social and the milieu. When we humans loose the coherence between these three, we loose ourselves. This message is the public art gift we offer to the community.Today all three ecologies are in deep and entangled crises: climate change, monoculture and loss of biodiversity in the milieu, the crisis of inequality, democracy and truth, social mass media and the growing technology dystopia that wrecks social cohesion and human subjectivity. The three bronze sculptures rest on the trunks of the dead birches. They are tombstones but surface new worlds, rich and vital.

DENKMAL is inspired by 'The Three Ecologies', Félix Guattari, 1989. DENKMAL explores the artistic route for not just the what, but also the how art can contribute today. DENKMAL creates facts that seem blackboxed (Latour 1987) but steer the way reality is perceived. Think of it as a new branche of speculative realism.THE CONCEPT AND THE ARTWORK DENKMAL IS PRODUCED FOR GEMEENTE NIEUWE IJSSEL BY JOHANNES BONGERS.CONVERTING DESIGN BY LASERONTWERP LICHTENVOORDE, NL
BRONZE CASTING BY JAN TE KULVE, EIBERGEN, NLFINANCIAL CONTRIBUTION BY STICHTING STOKROOS, STICHTING NIEUWE IJSSEL AND GEMEENTE OUDE IJSSELSTREEK.